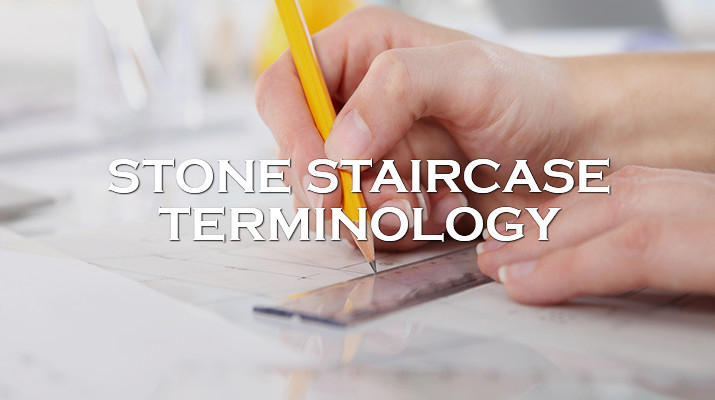 A staircase is a construction, in our case from stone, of a vertical bridge used for travelling from one level of elevation to another. This is a definition that, in truth, does not need explaining. There are many other pieces of staircase terminology that do not come up in outside conversation that are very much unknown to those outside of our industry. To help readers understand our work with stone staircases, we have created this list of the most common stone staircase terminology:

The balcony, also known as a gallery, is the upper floor area that overlooks the staircase and its landing. It is common for the balcony to connect to the staircase via a single connecting railing.

The balusters are the vertical posts that hold up the handrail. They are also often called spindles.

The balustrade is the overall system of railings and balusters that act to support people that use the stairway and prevents them from falling over the edge.

The banister – also called the handrail or railing – is the angled rail designed for hand-holding while using the stair. Depending on the needs of the staircase there can be railing on one side, both sides, or not at all. On wider staircases, you will sometimes find railing in the middle of the stairway.

Our in-wall stairs are known as cantilever stairs, however, they don’t actually cantilever at all, they act more like an arch.

A curtail tread is an over-sized bottom tread, often curved at the end, with some feature to accommodate the newel post.

A flight is a section of a stair that takes you from one floor to another. A staircase can have several flights.

The going of a flight of stairs is the horizontal distance between the face of the first and last risers. The individual going of a step is measured from face of riser to face of riser

A half landing is a larger in-flight tread that often changes the direction of the stair or provides a break in the stair on longer flights.

The newel is a large baluster or post that is used to anchor the handrail. Its role has an important structural function where it is common for it to extend below the floor and subfloor to be bolted into the floor joists.

The pitch line is the imaginary line along the tip of the nosing of the treads. It is sometimes called the rake of the stairs.

Post-tensioned stairs are typically constructed from solid treads, fitted with hidden cables. The cables are pulled into tension with hydraulic jacks.

A quarter landing is a larger in-flight tread that takes the stair around a corner.

The riser is the vertical portion between each tread of the stair. This can be omitted in some designs to create an open stair effect.

The soffit is the underside of the staircase. These can be shaped or smooth.

The spandrel is the triangular space that exists underneath a staircase when there is no other flight of stair beneath it.

The stringer is the housing on either side of a flight of stairs, into which the treads and risers are fixed.

The tread is the part of the stair that is stepped on. The tread depth is measured from the outer edge of the step to the vertical riser. The tread width is the measurement from one side of the tread to the other.

The tread profile refers to the shape of the tread, which can variously have a bullnose, round nose, fillet and cavetto.

Winders are radiating treads that carry the stair around a curve. A stair can have winders just in a section or the whole stair can be constructed from winding treads to form a helical.

We hope this helps you understand the conversations and documentation within the world of stone staircases.

Ian Knapper is a company of masons and experts in all things stone. We are always happy to help with any queries that you might have – all you have to do is get in touch.