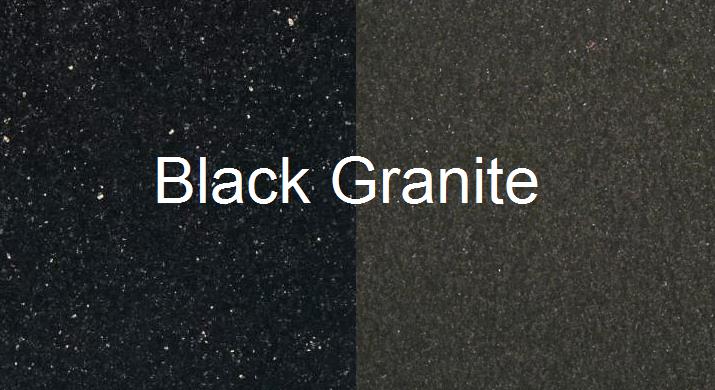 Black Granite is a term used to describe a fairly wide range of grey-to-black stones with similar properties from around the world. It was widely used as a building material by ancient peoples, including the Egyptians. The famous limestone Great Pyramid at Giza, for example, was decorated and tiled extensively with black granite; notably to line the walls of the King’s Chamber where the Pharaoh’s sarcophagus was found (itself made of red granite).

Many ancient ornamental and decorative artefacts have been found in black granite. Often the capstones (aka ‘pyramidia’—the ornate stones placed atop ancient pyramids) were made from polished black granite in order to catch and reflect the sun with dazzling effects. While black granite was undoubtedly chosen for its lustre and deep finish, clearly the ancient Egyptians also knew of the durability and weather-resistant properties of this wonderful stone too. It must have been incredibly difficult to work with due to its strength, density and weight, yet it was chosen over softer and more readily available limestone wherever permanence and resilience were important.

To this day, the black granite sections of many ruins are still in near perfect condition. And they still look beautiful. It is this durability, combined with understated yet enduring beauty, which make black granite a hugely popular building material for luxury homes, offices and public spaces as well as headstones and monuments at grave sites.

Black Granite as a Building Material

Black granite can be difficult to source in large enough blocks to carve giant sculptures or installations from a single stone. It is possible, but you are more likely to see black granite sold in tiles or slabs. For this reason, it is commonly used as a material for walls, flooring tiles, fireplace surrounds, bar tops and kitchen worktops or, in more lavish projects, internal or external fascia. It can also be used as cladding for staircases or other areas. Generally speaking, it is used to add colour and interest from an aesthetic angle (i.e. tiling, cladding and borders) or for its durability and strength (i.e. hearths and fireplace slips).

One of the most amazing characteristics of black granite is that it rarely depreciates; in fact an impressive black granite work surface, border or fireplace surround can keep adding value to a home as it ages! With unrivalled surface depth and graceful luminance, it is considered a luxurious and desirable material; and the fact that it is so durable makes it a sound investment. It even holds up against acidic liquids and strong bleaches (common kitchen spills) much better than most other stones.

There are two types of ‘finish’ which can be applied to black granite:

When black granite is polished, its lustre and vibrancy are amplified, giving it an alluring shine. Polishing is a popular finish for tiles, bathrooms, ornaments and decorative embellishments. The black granite border around the floor of the room in the image below helps to define the space and adds contrast against the lighter stone staircase. 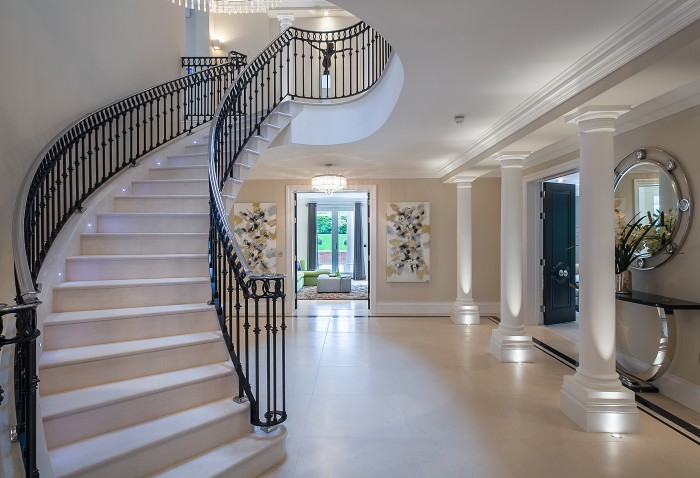 The Ian Knapper fireplace in the image below also uses Black granite to add contrast to the lighter stone, creating depth and a more striking visual impact. 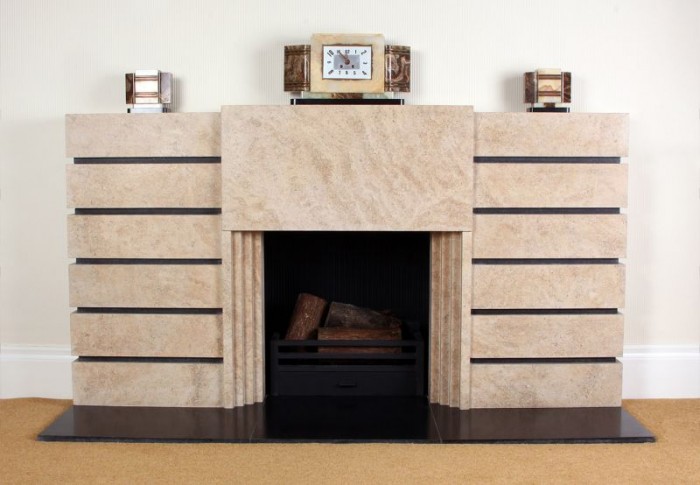 Honed black granite on the other hand has a less reflective ‘shine’ compared to polished granite, but still retains the ‘marbled’ (for want of a better word) composition and some lustre. It is often used for work surfaces and bar tops but it can also be used to add contrast in the same way as polished granite. The Ian Knapper fireplace shown below provides a great example. 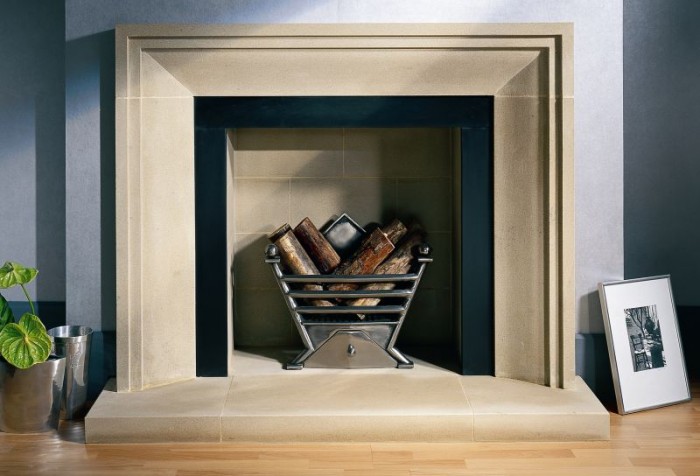 Most stones which are commonly used as building materials are ‘sedimentary’. They are stones which formed when tiny grains of sediment (often comprising bone and shell material – therefore rich in the soft mineral calcite) settled in layers, creating pressure which ultimately solidified it into stone over millions of years. However, granite stones— rather than being a by-product of immense pressure—are ‘igneous’, meaning they formed due to excessive temperatures (thought to be as high as 750 Celsius) in volcanoes and nearer the Earth’s core.

The volcanic activity which began to form granite rock in its molten state was probably 10 or more miles underground. Over a million years or so, the volcanoes forced the magma to the surface where it cooled and solidified into the dense, durable and beautiful stone we see today.

Black granite can be sourced with a huge range of differences in grain and hue. The white grains are crystals of the mineral feldspar (the most common on Earth) and the black colour comes from the minerals biotite and/or black mica. The ‘glassiness’ comes from the quartz in the granite. However, even stones from the same quarry can vary quite dramatically in composition, so skilled stone selectors are often required to match stones aesthetically.

Granite is thought to have come into existence around 300 million years ago: That’s twice as old as most sedimentary stones, such as the majority of British limestone. To put that in context… granite formed way before the appearance of reptiles, mammals or birds on Earth, whereas limestone formed afterwards! As a result of it’s age, the depth at which it formed and the tectonic movements of the Earth’s plates, black granite can be sourced from a number of places around the globe. Please feel free to talk to us about the more subtle differences between stone from different quarries.

If you’d like to talk to Ian Knapper about Black Granite or choosing a stone-type, please feel free to get in touch. Call 01538 722 733 or email us.